2016 Pastor and spouse retreat in review

I was apprehensive about attending this year’s pastors and spouses retreat. My official first day of on-staff pastoral ministry at Crossroads MB church wasn’t until June 1, 2016 – after the retreat. As someone new to professional ministry, I was concerned that I would not be able to relate to the other pastors in attendance. Would being single impede my ability to fully engage in activities? As a younger person (27), would I be surrounded by people twice my age, with very different interests and than mine? So far, this didn’t sound like my idea of a restful retreat.

But at the request of my lead pastor Marvin Dyck, I decided that despite my reservations, I would give it a shot. So hit the road and made my way to Lakeview Hecla Oasis Resort. Check in around 4:00p.m., tour my room and discover it to be quite grandiose, far exceeding my expectations. I revel in the little things, like personal room temperature settings and a huge bathroom. Oasis is indeed an appropriate name for the location.

From there I made my way to the MBCM check-in location and was met by a friendly face and presented with my nametag. I was greeted by several other pastors from across Manitoba. My biggest surprise, however, came when I realized that I was not the youngest person in attendance. While the majority were around or past their forties, many from my peer group were there.

Over the course of the retreat, I also had the privilege of meeting about half of the 70 or so pastors and spouses. As it turns out, not only was I able to relate to them and their ministry experiences, but they related to me and mine. The worship music was varied and represented an intersection of different styles. Executive director Elton DaSilva’s teaching sessions offered many points of engagement for leaders at every step of their journey, from just starting to finishing well – this was a personal highlight. 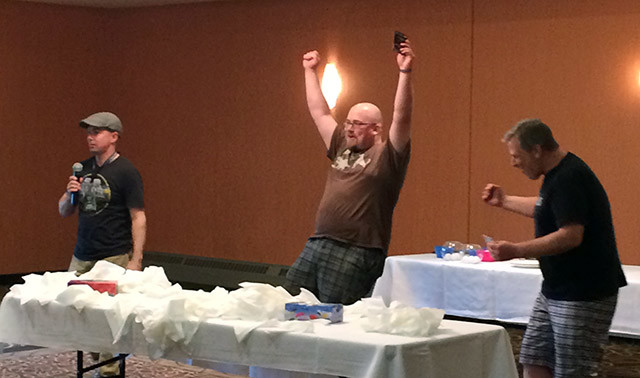 For most of the retreat my being single did not seem to matter either. There were some games designed for couples which left me feeling a little awkward, but luckily I did not have to participate in those. And, in the biggest game, not only was I the selected participant for a series of challenges, but I emerged victorious!

Overall, the MBCM pastors and spouses retreat was a great opportunity for me to rest and rejuvenate. I was able to meet my peers from the province and share with them in our struggles and successes. I was able to relate to the material and the people in a way that blessed us all. And while being single was at times difficult, it is no more so than in any other context. I now find myself a little wiser, much more rested, and looking forward to ministry and touching base with my peers again next year.