A to B, and In-Between

This summer I had the opportunity to go spend some time with B*rmese believers in Thailand and Mya*mar on MB Missions’ Action program. Part of our assignment was a ten day evangelism trip into Mya*mar where we encouraged believers and shared the gospel with people who had never heard it before. We travelled with a couple of B*rmese pastors who inspired me daily in how they lived out their faith. I had the privilege of rooming with Pastor Paul for most of the trip. Every morning I was woken up by his beautiful voice singing out English praise songs in the hotel shower. Often the first thing he would ask me in the morning was how I slept. I would normally respond with, “pretty good!” to which he would reply, “Praise the Lord!” I must have heard him say this phrase a couple hundred times a day. He took every small moment in the day to give praise to the God who has given him so much.

Throughout the trip we had a number of church or village visits planned, however a good portion of our ministry came about on route to one place or another. This is where the phrase, “as you go,” comes in. I remember one particular moment where we were waiting for a boat to arrive to take us down a river. We were situated in a house where the hosts had served us some snacks. Slowly people began to trickle in till we had a decent crowd present. Since we were waiting, Pastor Paul turned to one of our team members Mark, and asked him if he would share the gospel. So for the next hour or so that is exactly what we did, and in the end a group of people raised their hands, indicating that they wanted to receive Jesus as Lord. We didn’t plan this moment, but instead it was completely orchestrated by God. I can think of numerous times where opportunities opened up as we travelled from place to place.

I believe that God is orchestrating a beautiful symphony of divine appointments all around us, every day, in whatever “ordinary” situation we find ourselves in. The difference is whether we are attentive to this or not. Attentiveness means having our senses open to what is going on around us. We need to be looking, listening, feeling. On a mission trip this is easier because all our senses are focused on the goal that’s in front of us. What about our regular daily routine? We wake up in the morning going over our schedule for the day, then go on to check off one thing on our list at a time.

What if the greatest moments in our day are not the ones that are sitting in our day planner? What if there is an abundance of riches that lay along the path from point A to point B?

In Acts 3, Peter and John are on their way to take part in the three o’ clock prayer service. It is on their way that they encounter a crippled man. The man asks them for some money but instead, the two disciples turned it into an opportunity to let him know about Jesus and see him healed. Peter and John could have ignored the man and continued on to the next thing in their schedule. Sure, they may have been late for prayer time, but at least they didn’t miss out on this opportunity that God had presented to them.

I like the way that the ISV phrases the great commission by saying, “Therefore, as you go, disciple people in all nations, baptizing them in the name of the Father, and the Son, and the Holy Spirit. (Emphasis added)”

We have the challenge to make disciples in whatever situation we find ourselves in. This is the essence of an “as you go” lifestyle. We need to allow the Holy Spirit to open our eyes, ears, and hearts to what he has planned along the way. It is not always going to be comfortable, but it could turn into the greatest moments of our lives, or someone else’s. May we find the riches that lie along the path from point A to B. 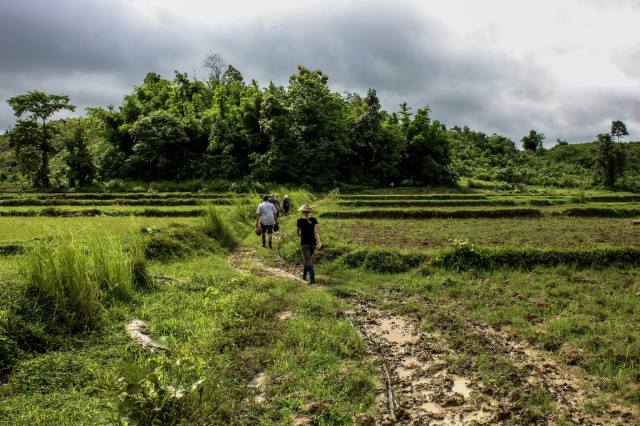