FaithWorks celebrated 20 years of ministry this past month, with a focus on the people who committed to growing this community’s mission.

“The mission of the church from the beginning is right in the name,” said lead pastor, Melanie Unger. “It’s a dual-track focus. Spiritual formation being one, from “Faith”, and then service to the community, from “Works”. We say, wherever you live and work, can you be the light of Christ in your neighbourhoods?”

FaithWorks started in 2002 as a small church plant of 12 people but very quickly grew to more than 100 attendees by 2004.

In the beginning they moved around a lot to accommodate the growing needs of the church. The church started in a small basement room in a church but soon found the local community club would rent them a larger room, for less money, that could better accommodate the rising numbers.

Mary Reimer, one of the founding pastors of the church, reflected on the time spent at the community club fondly.

“It was a nursery room, so there were little ducks and things on the walls,” Reimer said. “I noticed our little kids would drag these tiny chairs in front of the rows of the adult chairs and plop themselves down there.”

She shared that the little ones felt they belonged right at the front, and even to this day those children, now teenagers, will seat themselves right in the front row for the service.

They moved a number of times after the community club until they settled at the CMU chapel in 2005, where they have remained.

FaithWorks does things a little differently than most churches, having their regular services on Saturday nights at CMU and moving their service to Thursday nights at the church office during the summer.

Reimer explained this was done intentionally from the beginning.

“Cal Bergen, the other co-pastor at the time, and I would drive around River Heights on Sunday mornings and try to see what people did if they weren’t in church,” Reimer shared. “People were resting and spending time with family.”

They decided maybe people would be open to a faith community if it wasn’t on a Sunday morning.

“We made those decisions by looking at what is happening in the neighbourhood and looking at the reality of our weather and our culture,” Reimer continued. “People are often open to trying something, but maybe not just the one package we’ve offered for decades.”

Both Reimer and Unger shared the same vision of FaithWorks and the importance of the people, the relationships. Both admit it’s great to see a growing church but what they are really seeking in their congregation is people who are excited to be there and are committed to living out their mission every day.

“FaithWorks was never about the numbers,” said Unger. “To me it’s about who is on the ship with you. Are we authentic? Are we genuine? Are we being honest in our walk with God and with each other? Do we allow each other in to help along the way?”

FaithWorks does not have an ongoing membership, but rather a yearly covenant of commitment.

“It’s a yearly examine of life and how we do life together. So once a year for a few minutes, the church has no members,” explained Reimer. “We really encourage people not to sign unless they really have intention to withhold it.”

Many have been around for a long time, some for all 20 years, but those years didn’t always come easily. Reimer shared one of the hardest seasons for the church was losing one of their founding pastors early on. Both Mary Reimer and Cal Bergen had committed to five years of this endeavour, but after two years Bergen left FaithWorks and his family, who attended.

“It was pretty shocking. Suddenly I found myself with this little community that was reeling and I was feeling pretty inadequate to guide us through it,” Reimer shared openly. “But our leadership team was supportive of me and we took time to lament and be open with the church. And no one left. It was really a visual confirmation of their commitment.”

There were other times when the leadership had to make hard decisions but even when people wanted a different outcome, they were supportive and trusting.

“These affirming pieces really showed us that God was working in us and bringing us to places of peace, even in the midst of turmoil,” said Reimer.

Unger shared the challenge of transitioning from co-pastoring to sole pastoring. The church has relied on a co-pastor model for much of their time and making the switch meant looking at a new model of teaching.

“We moved to a more collaborative model where I don’t do all the teaching,” said Unger. “I now share that responsibility with a team of 13 people who are thoughtful, yet experienced thinkers and speakers.”

There were a lot of joyful memories also. Reimer specifically highlights the baptisms and having to find different places for them to take place as they never had access to a baptism tank.

Reimer and her husband also ran a “puppet college” for the kids where they would teach them to perform and then put on shows at places like seniors homes.

“For me that was a huge and meaningful highlight to work with those kids and figure out how to work with the Holy Spirit through puppets,” said Reimer.

She shared another time someone had mentioned wanting to try square dancing, but wasn’t sure if the church would allow it. Reimer jumped on the idea and soon they were having regular evenings of square dancing in a cleared-out barn.

One woman had such terrible pain in her jaw and neck the next day, she went to the doctor. Turns out she had a sports injury from laughing too much during the four house square dancing night.

“We put together a video for the twentieth celebration and I could just sit and watch it over and over,” said Reimer. “So many beautiful moments.”

On September 24th, FaithWorks celebrated 20 years of ministry with a special celebration service. Reimer, now retired, was asked to share the message and people were invited to write down things they were grateful for and put those things on the wall for everyone to read.

“A big theme was authentic community,” said Unger. “A sense of community being super important and people really feeling that sense of connection with each other as we follow Jesus together.”

After the service they had long-time attendees of the church bring special desserts and share them with the rest of the community. 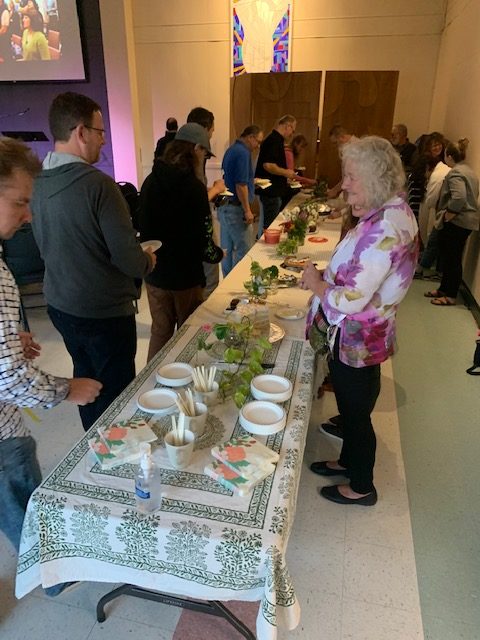 During Reimer’s message she had her granddaughter read a scripture while a baby photo was shown on the screen. Reimer explained how there was twenty years between this photo and her granddaughter now standing in front of them. She looked completely different but her DNA was the same.

“That’s the same as us. We’ve had lots of changes as a church, but we have the same DNA,” said Reimer. “We were formed on a foundation of prayer and worship and nothing has changed in that.”

Both Unger and Reimer are thrilled to be a part of the ongoing ministry of FaithWorks. Reimer shared she is grateful for a community that continues to invite her in even after retirement, and Unger shared that she is truly working her dream job leading the community.

We look forward to hearing more stories from FaithWorks, as well as our other growing MB churches in Manitoba.