I recently had the privilege of attending Gathering 2014, The Canadian Conference of Mennonite Brethren Churches semi-annual general meetings in Vancouver, BC. The following diary is from the perspective of a first-time attendee. It also provides a point of view of someone who is not a member of an MB church. As some of you may know, I attend a Salvation Army church. Gathering 2014 provided further insight and education into the MB family I now find mind myself adapting to.

This is but a snippet of the events and happenings over June 11–14, 2014. Not at all an exhaustive list, but rather a snapshot of those things that left an impact on me and triggered deeper thought or an emotional response. I have tried to capture the words spoken in as accurate a way possible, but in some cases I am paraphrasing.

6:45pm: I’ve arrived at the beautiful Marriott Pinnacle Hotel in downtown Vancouver. After unpacking and meeting up with some of my Manitoba colleagues, we take the 10 minute walk to The Centre, home of Westside Church. The former Centre for the Performing Arts is a large auditorium. One does not so much enter the building but becomes enveloped by it.

7:15pm: Willy Reimer and Paul Lowen take the stage to welcome us to Gathering 2014.

7:36 pm: Westside Church lead pastor Norm Funk shares his philosophy of ministry: “The people around here [downtown Vancouver] don’t know Jesus, don’t know the bible. I have to make a space for them to do so.

“We are always seeking the plant. – As long as you keep sending out, God will kept on sending in.”

Later, in his sermon, The Gracious Gift of Ministry (2 Corinthians 4:1–6), Funk reminds us that our ministry is first and foremost a gift of grace and mercy from the Spirit. He imparts the importance of passionately teaching the gospel: “We can’t talk about Jesus the Saviour without talking about why we need to be saved and from what…Preach the gospel with passion because it brings light into the darkness, and our people live in darkness.  It brings not only light but life as well – Jesus brings both light and life.  Our job description is not to proclaim ourselves, but to proclaim Jesus.”

8:15pm: Timeless hymn, The Old Rugged Cross is played by the worship team as over 200 receive communion. CCMBC Executive Director Willy Reimer proclaims: “Regardless of side issues, this is the ground we stand on.”

8:37pm: Reimer begins his keynote address Multiplying for Mission. “We begin at the cross” he says, “because that is where life begins.”

“Mission is always personal. It cannot be a number or a program. It’s not about hitting targets, but about seeing lives transformed by Jesus Christ…Fear has driven the church out of the city. The MB DNA is Mission. It’s time to raise up the person and gospel of Christ.”

6:07am: Yes, 6:07am. I can’t believe it myself. But with the time difference between Manitoba and British Columbia playing tricks on my sleep pattern, I stumble out of bed and into the daylight. A morning run along the seawall is a perfect opportunity to reflect on what I’d heard the previous night, and to prepare my heart for all that is to come in the days ahead.

9:00am: MB Mission General Director, Randy Friesen challenges us: “If you’re going to be a Christ follower, deny yourself – ‘take up your cross and follow me’ – There is only one path. This is punctuated moments later as together we sing, “I lean not on my own understanding, my life is in the hands of the maker of Heaven.”

10:34am: Back from a coffee break, Willy Reimer begins his ministry report by retelling a vision he had of the Mennonite Brethren church on their knees, praying for the nation of Canada. A vision of passionate leaders – from many denominations –rising up to put Jesus on top.

A central focus of Gathering 2014 was growing and equipping the local church: “If it doesn’t help the local church, we shouldn’t do it. Our mandate is Canada. We need Canadian solutions to Canadian problems. That requires partnerships from east to west. This is harder than working north and south”

4:35pm: A group of us embark on a walking tour of downtown Vancouver to visit church plants and the communities they serve. 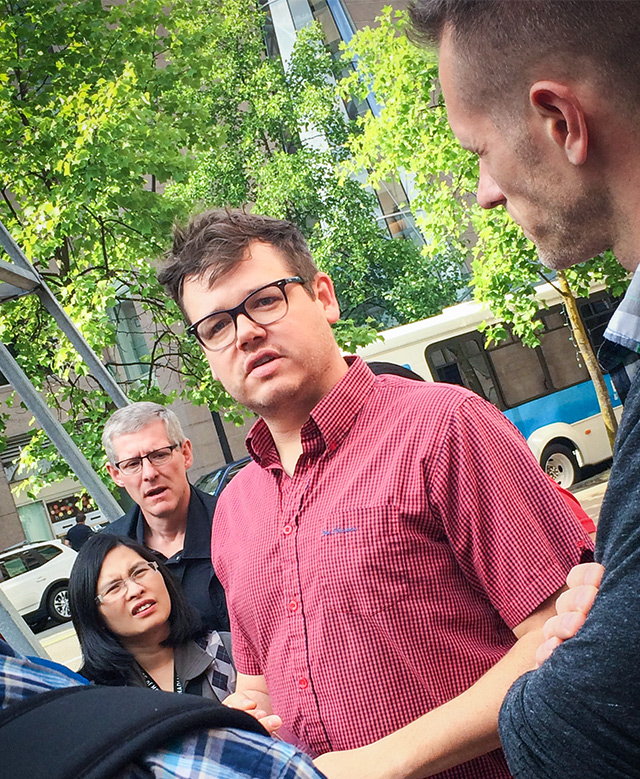 Meet Lance of Artisan Church, one of four church plants along Robson Street.  Artisan is a neighbourhood parish church that meets in the basement of the library. This Fall they are planting a second parish in east Vancouver.

9:13pm: After a lengthy walk and a delicious supper at a local Brazilian restaurant, we find ourselves outside our host, Dennis Wilkinson’s house. Dennis runs Meta Communities, an inclusive network of small communities that reaches out to those on the fringe or struggling with faith issues. Dennis has a passion for equipping local missionaries and prays that God will provide Meta with the means and facilities to further this mission. 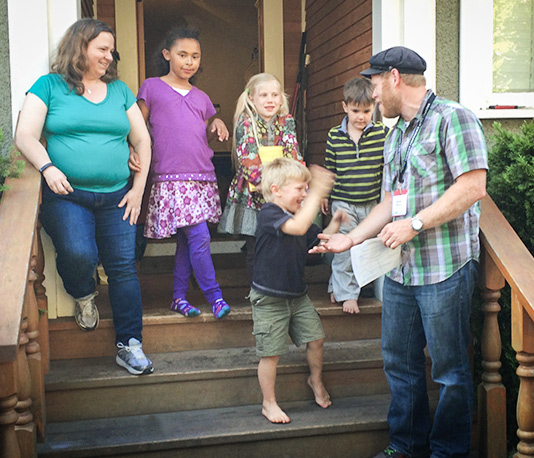 There are twelve people living in the Wilkinson home. As Dennis shares his vision for Meta, his middle daughter hands out watermelon. She is followed by her little brother who supplies the wet-naps. We gather around his children and pray for them and for the children of the neighbourhood. 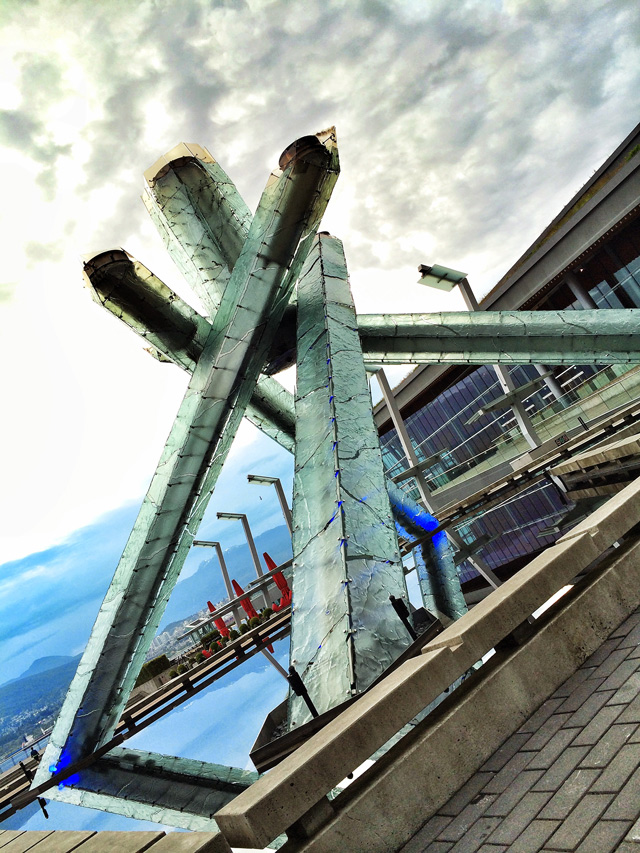 6:34am: It’s raining this morning, but that isn’t about to stop me from enjoying one last run along the seawall. The mist off the ocean hits my face and I am awakened to God’s creation. The splendour of his handiwork is around me and I am revitalized once again.

8:30am: Back at The Centre we enter into worship, led by Dean Morris & Nelson Boschman. Andrew Dyck of MB Seminary (MBBS), welcomes us with the blessing from Numbers 6:22–27.

Reporting begins shortly thereafter. We hear from MBBS and then MB Mission. Randy Friesen highlights initiatives including the DNA Exchange and Bring the Boots, a partnership with a Brazilian MB church.

11:19am: The C2CNetwork report has a significant impact on me. National Director Gord Flemming brings the full team on stage to report from their respective regions. I am amazed by the number of plants emerging across our nation. C2C not only works with MB churches but partners with multiple denominations, as Flemming states: “It’s more than church planting, it’s a call for revival. We are asking for a spiritual awakening!” 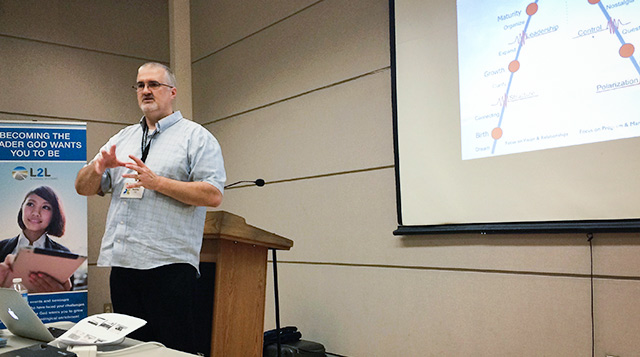 2:04pm: I sit in on two breakout sessions led by Daniel Beutler of Leaders2Learners (L2L). The sessions provide an in-depth look at just what happens when one clicks the “coach us” and “coach me” buttons on the resource website.

7:16pm: The celebration service has begun. Representatives from across Canada take to the podium to share their testimonies. I’m particularly moved by Veronque Beaudin of ETEM Montreal, who went in search of a new coat and found a church home. Beaudin – a victim of child sexual abuse – was suffering from depression and at her lowest point when Patrice Nagant and the congregation of L’Intersection, welcomed her in and accepted her. Beaudin opened her heart to us, sometimes stumbling with her English. When stuck, she would speak a word in French and someone from the floor would translate. Her vulnerability was disarming – her openness, captivating.

8:05pm: Bruce Enns of Forrest Grove Community Church in Saskatoon SK, gives the plenary address: In pursuit of being a mature multiplying church Enns challenges us to co-operate with all, including those we don’t get along with. “We need different people,” Enns says, “Unity breeds maturity and maturity equals mission. Then The Gospel gains credibility.”

Enns emphasizes the importance of having both “builders’ and “gardeners” on our church team, working together with Jesus Christ as the foundation.

7:19am: Sleeping in a little this morning. No run, but rather I’m taking a few minutes to pack my things and check out before heading to The Centre for the closing session.

8:30am The final day of reporting and decision making is quite short. We make our way through agenda items with relative ease and Willy Reimer brings Gathering 2014 to a conclusion by reiterating Norm Funk’s challenge from Wednesday night: That we be a authentic people, set apart by Christ and called to preach the Gospel.

3:24pm Awaiting my flight at Vancouver International Airport. Still humming songs from the morning session, I can hardly believe how quickly the past three days have passed.

Gathering 2014 was not unlike the national events I’m used to attending as part of The Salvation Army. Yet there was an atmosphere of unity present that I didn’t quite expect. The MB Church stood, or rather knelt – in solidarity – praying and working together to bring light into the darkness and spark a revival across Canada by proclaiming the Gospel of Jesus Christ.

Carson Samson is Communications & Church Resource Coordinator for Mennonite Brethren Church of Manitoba. He does stuff. All kinds of stuff. And he really, really likes Star Wars.